Continuing from my post earlier in the week, I set out to start embroidering the purse front before continuing on with the handles and lining. 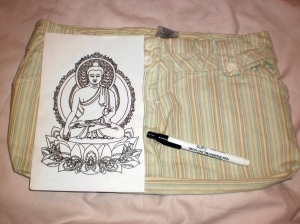 I decided upon this image of Buddha because it is beautiful. Also, I’ve been watching a lot of documentaries on Buddhism over the last couple of months and so it’s been on my mind. Here are a couple of videos from YouTube, for those of you who might be interested. Feel free to skip over them if you’re not 🙂 This first is only about 2-3 minutes and is just a basic introduction to what Buddhism is.

This next one is the first of a two-part look at the relationship between Buddhism and science. This one is actually pretty cool and gets into quantum physics.

To get the image onto the purse, it is best to trace the image with a heat transfer marker or pen and then iron on the design. I have both a Sulky iron-on transfer pen (which is my preferred implement) and a basic heat transfer pencil. I discovered my Sulky pen was dry so I have to use the pencil.

Maybe because I’m tired, maybe because I just wasn’t thinking, I thought neither about the printer ink nor to use an

ironing cloth. This is what happens when you don’t pay attention to what you’re doing, folks. I’m really hoping that the ink will come out. If not, I’ll have to decoratively hide it with some extra dazzle. Also, as you can see, the heat transfer pencil doesn’t show up nearly as well as I’d like (the Sulky pens show up so much better but don’t last very long at all).

Some months back, a relative of mine gave me a bag of clothes she no longer wanted. I took most of what she gave me to 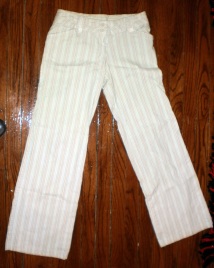 the second-hand store where I work during the day, but in this bundle of clothing were a cute pair of pants that I just couldn’t let go of. Sadly, they’re a junior’s size 5 and don’t come up over my grown woman hips.
So, I sat on them for awhile, trying to figure out what I wanted to do with them. Yesterday evening I finally decided to make a purse with them.

The first and most basic step is to cut off the legs. You want to cut them off pretty much at the crotch. Observe the dotted “cut here” line I drew in.

I’ve seen a lot of these purses made in such a way that after the legs are severed, the bottom edge of the now super-micro-mini-skirt is stitched together. This is fine, but it doesn’t allow for much actual storage space. So I made mine with a bottom plate. Simply cut out an extra rectangle of fabric and stitch it on the bottom edge of the skirt…

Of course, you may have to play with it a little get the proper sizing. Making the initial rectangle longer than it needs to be, like I did, is better than cutting out something too short. You could also just do the measuring and math, which is probably quicker, but I’m lazy. 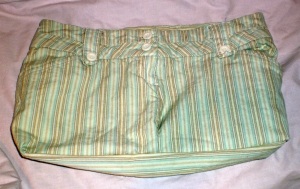 Now I just need to add the straps and a lining and Presto! However, I think I want to get a little fancy and do some embroidery on it first..  Any ideas or suggestions? I’d like to here them! Seriously, give the comment box some love!