It’s been quite a busy week and a half since my last posting. I’ve been helping Barbie rehabilitate after spe

nding several years in a box. I’ve given her a good scrub down, washed her hair, found her better clothes, and have been bringing her up to speed with technology – she remembers the internet, but last time she was on a computer, Windows 95 was the standard. She spent an entire night last week just on Youtube watching cat videos! She’s been on my computer almost every day. It had become a routine that I would get home from work and have to kick her off so that I could use it. So, you can imagine my surprise when I came home yesterday evening and found Barbie asleep on the couch and Morrígan sitting at my laptop instead!

Morrígan’s eyes were so transfixed on the screen she barely noticed as I sat next to her on the bed. “What’cha reading?” I asked.

She didn’t respond, but looked down at her feet. I leaned over, curious as to what the matter was. On the screen were several open tabs – blog posts and youtube videos – all making the same general statement: Lammily dolls are fat, boring, and ugly. A pain seared through me. I looked down at Morrígan, who was trying hard to hold back tears. “Don’t listen to them,” I said, bringing her into my arms, “these are only a handful of people. Do you know how many people love and support you?”

She nuzzled into my shirt. “Why are they so mean to me? I didn’t do anything to them! Why do they hate me so?”

I didn’t know how to answer her. How could I explain something I didn’t fully understand myself? “Well, I’m not entirely sure. Sometimes people just really like what they already know. Maybe they see how you’re not exactly like the other dolls and they don’t like the change.”

Hearing the commotion, Barbie awoke from her slumber and came upstairs. “What are you guys talking about? Is there a new cat video?”

Morrígan pointed toward the laptop, “They’re saying how ugly I am and how pretty you are and that you inspire imagination and fantasy and that I am boring!”

“Oh. That. Well, you’re just going to have to deal with it,” Barbie said with an air of authority, flipping her hair with her hand, “Take it from someone who has been in this business for a very long time: You’re going to have people who criticize and hate you no matter what. So you might as well get used to it.”

I did not appreciate Barbie’s tone. I could sense that maybe this was some false bravado. “Morrígan,” I asked, “can you give us a moment?”

After Morrígan left the room, I gave Barbie a chance to explain herself. “Why are you acting this way, Barbie? Is there something you’re not telling me?”

There was a silence for several minutes. And then Barbie sat at the computer and pulled up another list of blogs and videos that ridiculed and poked fun at her for being unrealistic and damaging to girls. She looked at me sheepishly. “Let me see if I’m understanding you correctly,” I said, “you felt bad about yourself, so, you decided to act tough and try to bring Morrígan down?”

She nodded. I pulled her close and held her the same way I had Morrígan earlier. “Barbie, you have done so much for little girls by going forward and holding so many jobs that, at one time, girls never aspired to – you’ve been a doctor, an astronaut, a pilot, a business executive, and since you’ve been in that tote, you have even run for President of the United States! You’re not perfect and there are some legitimate concerns around body image issues and racial diversity, but these are issues that can be addressed. But, no one is perfect and your faults should not detract from your strengths. But,” I told her, “You really do owe Morrígan an apology.”

Barbie hopped off the bed and went to find Morrígan, who was laying on a pile of fabric in the sewing room. Barbie sat down next to her and put her hand on her shoulder. “I’m sorry I was a jerk downstairs. Thing is, the internet has been really mean to me, too. I’ve been reading all of these posts saying I’m horrible, that I’m unrealistic, and worst of all, they say that I’m hurting the children I’ve always been trying to help. I can’t help the way that I look, this is how I was made,” she slumped over, “Now I feel awful. I hate the way I look now.”

I took a deep breath and walked into the sewing room and addressed both the dolls. “I don’t know why society has such a hang up on women’s bodies and looks. Or why people love to sensationalize or focus on the negative. It is true that the Lammily dolls were created in response to a need for a more body positive doll. But that doesn’t mean you should hate your body, Barbie. Your proportions won’t work for a human, but that’s ok because you’re not a human – you’re a doll. No one should feel bad about the body they’re in. People come in all shapes and sizes. Now dollies are starting to come in different shapes and sizes.”

“So, there isn’t any one standard of beauty?” asked Morrígan.

“No,” answered Barbie, “and there shouldn’t be.”

After my Lammily doll, Morrígan, became a gateway into the doll world for me, my grandmother decided it was time to give me this old storage tote. She informed me that the tote was full of old Barbie dolls that were leftover from my childhood. Intrigued and hoping to find dolls I could experiment re-roots and re-paints on, as well as potential friends for Morrígan, I lugged the dusty old tote into my apartment. I had no idea what I would find. Morrígan came downstairs to see what all the fuss was about. “What is THAT?” she asked.
“It’s a tote,” I said, “full of trinkets from my childhood.”
“Can I open it?”
“Go ahead. I’ll let you catalog the entire thing.”

Morrígan stands, gazing at the tote of wonder.

What treasures lay hidden within your walls?

Like finding sarcophagi, all the burial shrouds of the dead toys would need to be removed to reveal the mummies inside.

Some old stuffed animals, carefully packaged Beanie Babies that we once swore would be worth millions, and a dozen ceramic keepsakes were what we could see. At the bottom, buried under everything else, was a single Barbie doll: A mid-90’s remake of the original design. Her dress, her hair, and her body were smeared and blotched.

“Who is she?” asked Morrígan.
“Someone I haven’t seen since I was a child. Her name is Barbie,” I answered.
There was a sharp gasp. Barbie was waking up. I helped her to a chair as she tried to orient herself. “Where am I? Who are you? No… wait…” Barbie looked at me closely. She recognized me. “You’re so much older! How long have I been in that tote?”
“I think that answer might depress you. Here,” I motioned for Morrígan to sit in the empty chair, “there’s someone I’d like to introduce you to.” 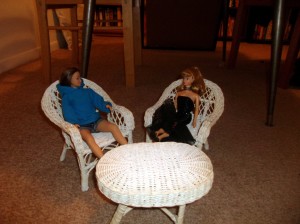 As Barbie rested to regain her strength, the two dolls faced each other. “Is this who everyone tells me I’m trying to replace?”, thought Morrígan. She looked over at me and then back at Barbie. She watched the stranger fall asleep in her chair and her mind began to stir with questions. So many questions.