After my Lammily doll, Morrígan, became a gateway into the doll world for me, my grandmother decided it was time to give me this old storage tote. She informed me that the tote was full of old Barbie dolls that were leftover from my childhood. Intrigued and hoping to find dolls I could experiment re-roots and re-paints on, as well as potential friends for Morrígan, I lugged the dusty old tote into my apartment. I had no idea what I would find. Morrígan came downstairs to see what all the fuss was about. “What is THAT?” she asked.
“It’s a tote,” I said, “full of trinkets from my childhood.”
“Can I open it?”
“Go ahead. I’ll let you catalog the entire thing.”

Morrígan stands, gazing at the tote of wonder. 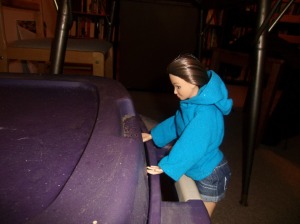 What treasures lay hidden within your walls? 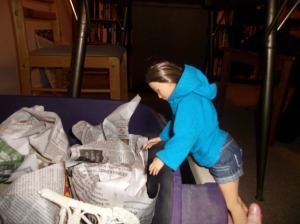 Like finding sarcophagi, all the burial shrouds of the dead toys would need to be removed to reveal the mummies inside.

Some old stuffed animals, carefully packaged Beanie Babies that we once swore would be worth millions, and a dozen ceramic keepsakes were what we could see. At the bottom, buried under everything else, was a single Barbie doll: A mid-90’s remake of the original design. Her dress, her hair, and her body were smeared and blotched.

“Who is she?” asked Morrígan.
“Someone I haven’t seen since I was a child. Her name is Barbie,” I answered.
There was a sharp gasp. Barbie was waking up. I helped her to a chair as she tried to orient herself. “Where am I? Who are you? No… wait…” Barbie looked at me closely. She recognized me. “You’re so much older! How long have I been in that tote?”
“I think that answer might depress you. Here,” I motioned for Morrígan to sit in the empty chair, “there’s someone I’d like to introduce you to.”

As Barbie rested to regain her strength, the two dolls faced each other. “Is this who everyone tells me I’m trying to replace?”, thought Morrígan. She looked over at me and then back at Barbie. She watched the stranger fall asleep in her chair and her mind began to stir with questions. So many questions.

4 thoughts on “Morrígan Makes a Friend: A Tale of Two Dolls”