Home » Thoughts About » Someone Broke into my Car

Last night, as I got in my car to head to work, I turned on my stereo to discover that, instead of the David Bowie playlist I created on my iPod, the radio was playing instead. I looked down to discover that my iPod (and the cord, and my headphones) was missing. This is the 3rd time in a matter of months that my iPod has been stolen out of my car. 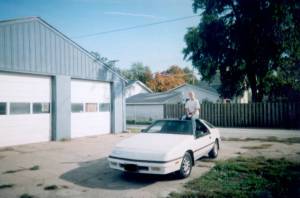 The 89 Daytona I used to drive. Before it went to crap. There was no opening these doors.

I suppose that it’s my fault for leaving it in the car in the first place. It also doesn’t help that I occasionally forget to lock my car. The beater I drive for 8 years was impossibly hard to open so I never needed to before upgrading. I’ve been trying to be better about that since break in #2. Also, I was parked in a different spot this time, so, I suspect it may even be the same person.

On the one hand, I am kind of irritated because I didn’t exactly have another iPod in my budget. On the other hand, I know that there are much bigger issues and that, whomever took it, probably had their reasons. Maybe they wanted one and couldn’t afford one. Maybe they needed the money that could be made from selling it. Accepting that rationale, I make peace with it. Because I realize that, at this point in my life, I have the fortune to not have very many unmet needs and could just buy another if I choose to (don’t get me wrong – I’m not rich. There isn’t a lot left over for wants, but needs are certainly met). I was similarly un-phased when someone stole my bike some years ago when I still worked at a thrift store and used that bike as a primary mode of transportation. I just figured someone else must have needed it worse than I did.

We live in this society that places so much value on material objects. These objects, like clothing, carry meaning and send messages to others around us – our interests, our values, our status within society. We are repeatedly told that having these things will bring us happiness, and, for a very short, fleeting time, they do. We are told that we need these things – being able to at least look the part we want to play can go a way toward making us feel it and to making others around us to treat us that way. Have you never heard the phrase, “The clothes make the man”? Well, so do accessories and gadgets. I don’t blame anyone for using objects to try to belong to something, even superficially. Belonging is a human need. It also just so happens that our society does not give everyone the same opportunities to seek these things out in the legal or socially accepted ways.

So, in conclusion, at the end of the day, it’s all just stuff. But after I buy the next iPod I’m going to start bringing it inside with me.