The muse for this post was this Veritasium video – I started to share/ comment on Facebook, but quickly realized I was writing a small novel.
While I certainly don’t have the kind of subscriber or viewer numbers to really matter at this point anyway (and the shift in my time and attentions once grad school started slumped down what numbers I did have as I simply wasn’t making anything at that point), but this is something I have been seeing as well: The rise in time-sensitive video topics and click bait.
I haven’t posted anything myself in some months – either here or on Youtube. I’ve been working on some doll unboxing videos here and there since the start of the year, nothing to upload yet, just a number of them in various states of completion. And I have been hesitant to post what I have done, as many of those videos would now be considered “old news”. 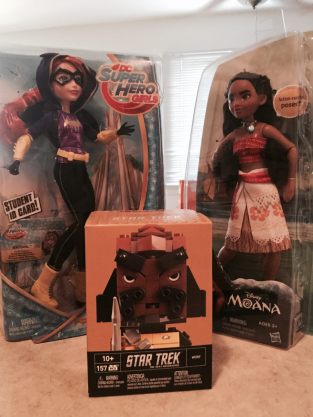 The Moana doll that I got for Christmas? I haven’t even seen her for sale for over a month. Those Batman v. Superman: Dawn of Justice collector dolls from Mattel were only big right after that movie came out. Is it even worth the time at this point to finish editing the unboxing of the Batman doll I got? The big thing in the doll-world at this moment is the new Ken dolls. My most viewed blog post was from Feb 2016 when I wrote that comparison between all the new Barbies and Lammily. I’ve considered doing a companion for these new guys, but I would need to go buy the short Ken and there are already dozens of other blogs and videos at this point. So is it worth it? And even if I could manage to stay on top of every new release and quickly turn out new content for every new hot item, I certainly don’t have the income to buy every hot doll that comes out the moment it comes out. I really need to re-assess what kind of content I’m creating.

Readership has been steadily decreasing – I deeply appreciate those of you who stick around despite the periods of lull.

Although the Spring semester ended nearly 2 months ago, I’ve not yet produced what I had hoped to. I’ve taken some of that time to just relax and allow myself to de-stress rather than quickly switch gears and just keep pushing myself. It’s been worth it. My creativity has started to flow again. I have ideas again. That urge to make things has come back — If you follow me on Facebook, you’ve already seen some of these results. (Sorry, Twitter people, I always mean to post there as well, I just don’t always remember).

I made this little bodhran and tipper just the other day.

I have roughly another month and a half left before the Fall semester begins. Let’s see what I can churn out in that time.