Perhaps not surprisingly, yesterday’s Google Hangout experiment resulted in my sitting in front of a camera for an hour by myself. Not a single person logged in. And that’s ok. I don’t currently have an extremely large readership, not everyone has access to a camera for such hangouts, and I’m sure everyone had other things they wanted to do with their Saturday afternoon.  But that’s ok. Rather than just blankly stare into a screen for an hour, I used the time to work on half completed projects.

Some months ago, after determining the general background that I wanted to give Morrígan, my Lammily doll, I decided to make her a miniature bağlama that she could play. I actually came across an excellent tutorial by Özden Ceyhan over on Blogspot. Since this is a traditional Turkish instrument, it is not surprising that the language of the article is in Turkish. However, between auto-translate and Mr. Ceyhan’s wonderful step by step photos, knowledge of the language isn’t required (although I personally find Turkish to be an attractive language). Because I know that my links aren’t as easily seen (I don’t know how to change the color for them), I want to make sure to give Mr. Ceyhan’s tutorial special attention:

I didn’t follow Mr. Ceyhan’s process exactly, but I did use it as a guide. I glued 3 layers of balsa wood together and whittled and sanded the shape down from there. For the tuners, I cut down toothpicks into 7 small sections of equal length and bore them into the head. I used a Rust-Oleum stain marker to give the instrument color – although, probably because I used a marker instead of painted on stain, the finish looks blotchy to me. But, I suppose it will work.

Because I am sure that most of my readers have never heard this beautiful instrument before, let me share a clip so that you can appreciate the wonderful sound it creates.

When I imagine Morrígan playing, I imagine her sitting against her window, looking out to the world, and letting her heart pour out. I imagine that she sings songs her father taught her as she thinks of him hundreds of miles away back in Turkey. 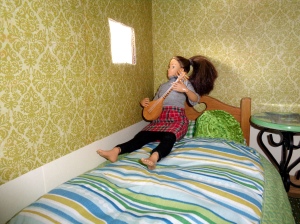 If I ever had the time, I would love to learn how to play one of these myself – and I found a rather decent beginner’s information page I felt was worth sharing: here. As it is, I’d really love to learn Turkish (along with Hindi and to become more proficient at Spanish and Japanese – both of which I studied in college but am not very good at). Maybe Morrígan can teach me? 😉