I was scrolling through my Facebook this morning and came across a link one of my friends had posted about a former TV star speaking out against certain t-shirt JC Penney had been selling a few months ago (they have since stopped). Here is the link if you’d like to read it yourself: Former “Blossom” Star Speaks Out About Controversial T-shirts

This is not the first I’d heard about these shirts, and it really isn’t just JC Penney. I can remember, maybe a year ago, while sorting through clothes at the second hand store that is my current day job, I came across a woman’s t-shirt reading “Why do I need brains when I have THESE?” written across the chest. I couldn’t tell you where it originated, but it could honestly have come from any number of stores.

It wasn’t until after WWII and into the the 1950’s that t-shirts as we know them really came onto the scene. Before that, the t-shirt was really nothing more than underwear. They started off rather plain and nondescript. While I don’t know exactly when, I can peg it to sometime in the 60’s when these simple pieces of clothing started to evolve into the forms of art and expression we know them to be. Tie-dye, the iconic Happy Face and a wide range of other designs were to be found.

Amid all this decoration and corporate advertising over the last half century, it’s really hard to truly pinpoint when we started designing these shirts more to be read than just gawked at. Some pages claim it was the 80’s, some the later part of the 90’s. Having been a child in the 80’s, I can remember wearing shirts and dresses with slogans on them, band tees and Disney characters with the occasional adorable caption. I also remember a lot of home-made fabric paint/ applique artwork as a child. Applique ::shudders::
I didn’t really start noticing t-shirts with no other designs aside from the one-liner until I was in High School (of course, I wasn’t yet working and thus able to actually shop for myself before then). Whenever they began, it seems to me that we are becoming increasingly hooked on all these encompassing one-liners (and the occasional paragraph). Our t-shirts are reflections of ourselves, our personalities, our beliefs and convictions. They make bold statements about political issues or just make us laugh with witty remarks on everyday miscellany.

The biggest question that Mayim Bialik is trying to ask in her statement is why do we find this phrase to be humorous? Indeed, when we try to actually understand why we find a thing funny, we are learning about ourselves and our society. There was actually an entire section on this subject in one of my Linguistic Anthropology classes at UIUC, and I suddenly find myself wishing I had kept those textbooks. We use humor to make statements about our world and how we fit into it.  We use jokes to address difficult subject matter in a way that connects us to others and helps us cope. Comedians look to culture and society to find their material and similarly, we can turn the mirror around. So when we read the phrase, “I’m too pretty to do homework, so my brother does it for me”, why would we find this even remotely funny? Our cultural history has long placed women and girls as these creatures who are valued by their beauty.
You find it in artwork hundreds of years old, in the traditional archetypes. Women are glorified as chaste and beautiful goddesses or maidens, or chastised for their tempestuous sexuality, or mocked for their lack of physical beauty. It has only really been within the last 30-40 years that we’ve started to see women entering the workforce and daring to do jobs traditionally assigned to men. Before that, if a woman hoped for a relatively well to do life, she needed to find and charm a successful man to marry her. The idea being that if you’re attractive, you’re more likely to have a better life. For men, the jobs that brought about more prestige and more money were those jobs that utilized their brain-power more than their brawn. (Your classic blue-collar/ white-collar distinction). So, the successful man was intelligent and clever while the successful woman was physically appealing. Even once we started seeing more “smart women” archetypes, they tended to be dowdy or plain and usually single. (Note Daphne vs Velma from Scooby Doo)  The idea here is that, pretty women don’t have to resort to using their brains because they can find a successful man to provide for her. We still see this idea as a driving force in our popular culture today. (Hello, Desperate Housewives?)

Despite advances women have made in Western society to be considered equal to a man, we’re still living in a half-changed world. It is this tipping back into lingering archetypes and gender roles that makes the shirt both funny and offensive. Some would even argue that it’s funnier _because_ it’s offensive – a resistance to change and a satire of the recent cultural conscience and awakening.
While I am glad to see JC Penny has removed the shirts, I know that this is the tip of a large iceberg.

Some of my t-shirts 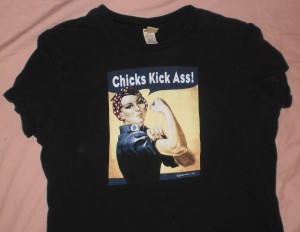 Now 10 years old and falling apart, I bought this shirt with my first paycheck at age 16.

From CafePress.com, this is my first internet only tee.

Made by the artist, Mary Tumulty.

I was playing around on facebook today, when I came across a Gizmodo article entitled Free T-Shirts Given to Neo-Nazis Revealed a Secret Message After Being Washed. You can read the entire article here.

Now, I am head over heals in love with this entire concept. From a social standpoint, I adore the message of peace and tolerance that the shirt conveys. As a crypto-buff, I admire the use of steganography (the art/ science of hiding messages). But most important, for the purposes of this blog, I am intrigued by the technical process. In other words, I see this and have to ask, “How did they DO that?”

While I don’t know too much about more complicated dying processes (yet), I know there are 2 basic elements to dying or printing: dyes and resists. Dyes are the what actually penetrate the fabric and create colors. Resists stop the dyes from penetrating into the fiber either in part or in full, this is how all manner of batiks and marbleized effects are done. According to the article, the top image washes out in the first wash. The top image could possibly have been created using some kind of resist, which would not stick to the fabric when washed. However, looking closer at the image of the shirt after washing, you can see that the black of the t-shirt isn’t as dark, in fact it seems that the top layer has broken up into fine particles and dispersed throughout. This might be a resist used in combination with some other paint or dye.  In the commentary to another article on the same shirts, a commentator called Phisrow suggested that “…a starch-binder adhesive mixed with titanium dioxide or a similar pigment powder…” would most likely account for the effect.

Sadly, I do not have an answer as yet as to how they pulled it off, even after spending the last 2 hours searching for an answer on teh internetz. However, this just makes me all the more in awe.